The liver is the largest gland of the body, weighing 1200 -1600 g, it is wedge-shaped, and covered by a network of connective tissue (Glisson's capsule). 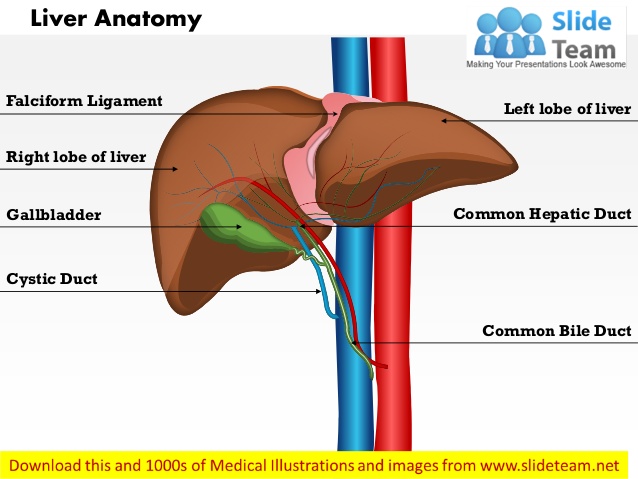 Situated in the upper right portion of the abdominal cavity, the liver is divided by fissures (fossae) into four lobes: the right (the largest lobe), left, quadrate and caudate lobes.

It is connected to the diaphragm and abdominal walls by five ligaments: the membranous falciform (also separates the right and left lobes), coronary, right and left triangular ligaments, and the fibrous round ligament (which is derived from the embryonic umbilical vein).

The liver is the only human organ that has the remarkable property of self-regeneration. If a part of the liver is removed, the remaining parts can grow back to its original size and shape.

Venous blood from the entire gastrointestinal tract (containing nutrients from the intestines) is brought to the liver by the hepatic portal vein. Branches of this vein pass in between the lobules and terminate in the sinusoids. Oxygenated blood is supplied in the hepatic artery. The blood leaves the liver via a central vein in each lobule, which drains in the hepatic vein.

· Hepatic vein - one of several short veins originating within the lobes of the liver as small branches, which unite to form the hepatic

veins. These lead directly to the inferior vena cava, draining blood from the liver.

· Inferior vena cava - formed by the union of the right and left common iliac veins, collects blood from parts of the body below

the diaphragm and conveys it to the right atrium of the heart.

· Hepatic artery - a blood vessel which supplies the liver with oxygenated blood. It supplies 20% of the liver's blood.

· Hepatic portal vein - a blood vessel which drains venous blood into the liver from the entire gastrointestinal tract. It supplies the

remaining 80% of the liver's blood.

· Lobules - hexagonally shaped functional units of the liver, made up of liver cells arranged in one-cell-thick platelike layers that radiate

from the central vein to the edge of the lobule.

· Sinusoids - small blood vessels between the radiating rows of hepatocytes. They receive oxygen-rich blood from the hepatic artery

and nutrients from the intestines via the portal vein. Oxygen and nutrients diffuse through the capillary walls into the liver cells.

· Portal area - situated at he corner of each lobule, it is a complex composed of branches of the hepatic portal vein, hepatic artery, bile

main bile duct of the liver, the hepatic duct. This joins the cystic duct, which leads from the gallblader, to form the common bile duct,

which drains into the duodenum.

sinusoids and drains the blood into the hepatic vein.